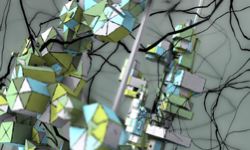 END_OF_DOCUMENT_TOKEN_TO_BE_REPLACED

2005 from shortlists to winners

I finally finished the shortlists before the end of the year. No shortlists for MVP…

END_OF_DOCUMENT_TOKEN_TO_BE_REPLACED

Warp’s eclectic DVD selection reflects the obsessions, twists, turns and writhings of this label which, although firmly marking home territory in electronica, has never wanted to be so easily boxed and defined. So it is with the promo’s presented here. Although Cunningham’s seminal, impactive videos for Aphex Twin and Squarepusher are included, seen in the context of this collection they do not define Warp’s moving images as much as we’d probably expect, even if they cast a long, dark shadow.

Working on shoestring budgets and without the benefits of digital production and effects coming on stream until the mid-nineties, the early videos are still an exercise in experimentation and ideas, a genuine reflection of the music output. It’s good to see videos rough around the edges (even if, as in Jarvis Cocker, of Pulp’s, early Aphex effort, this is mostly curio value ), as it is Warp’s embrace of the DIY digital creators, post-2000, with the tools to create altogether slicker fare.

Tellingly, the most recent releases on the DVD read like a who’s who of rising-star video directors (Briet, Lynn Fox, Holdsworth, Rutterford, et al), a testament to Warp’s willingness for creators to have a high degree of freedom in creative production. And we can be sure that the next crop of music videos they produce will also utilize breakthrough talent. In videos such as Ed Holdsworth’s Half of What for Prefuse 73, a capsule city journey of abstract, shimmering light, and the ode to environmental elements, both of urban and natural wildernesses, that is Sam Tootal’s contribution for Mira Calix, they have visual contributions with a deftness of touch and lyricism which they would do well to expand upon.

If a criticism can be made of this collection, it lies with the fact the grand-scale of a Windowlicker is so rarely seen. The trajectory of the videos appear to have become ever more tightly shrink-wrapped around the music, rather than adding another layer of meaning and emotion, as opposed to just motion. A problem which may lie with the creators more than anything (and a criticism which echoes far louder with less creatively-centred record companies). While one can’t expect epics for every release, Warp need to continue deforming their ‘box’, bending definitions, if they are not to be a victim of the expectations they have so assiduously created from loyal fans. If they stay true to the excellent heritage of this collection (particularly the justly lauded highpoints), and continue to find ever more warped visions, then they shouldn’t disappoint. Warp Vision is a timely reminder of the label’s revolutionary past as much for them as it is for us.
END_OF_DOCUMENT_TOKEN_TO_BE_REPLACED

A clinical yet grotesque micro-world is explored in Quietus, where renegade motion fragments illustrate a…

END_OF_DOCUMENT_TOKEN_TO_BE_REPLACED

The latest work from Pleix is an indirect elegy to 9-11. Subtle use of motion…