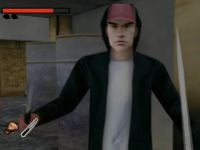 I’ve been speaking with rising new music video director, Ben Dawkins, recently for the music video book I’m writing. Although not a music video, Ben suggested I check out the latest work he’s done for a major new campaign against knife attacks for the Met Police.

It’s fascinating that the Met are trying to talk direct to kids in their new campaign through replicating the visual language of computer games, and it makes complete sense.

The spot has a clever machinima-like gloss (even though it is obviously pre-rendered and not realtime), with the familiar camera swoops, corner icons and on-screen power bars familiar to all games console players. It segues seamlessly between the game-like action and real life footage illustrating the difference between virtual and real violence.

As long as the Met don’t get heavy about some kind of correlation between computer game violence and real-world actuality, this attempt by the police to talk in the right visual language for the target audience might help everyone. The campaign even has Coldcut attached for the soundtrack.