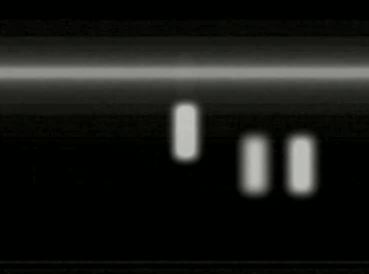 The minimalist art/music videos by Karl Kliem under the label, Dienststelle, are some of the purist examples of the form. Clean, and fluid, they cleanse the palette after seeing too many saturated colours and choppy cuts.

I asked Karl Kliem, the director a few questions about his work.

Matt Hanson: What was the inspiration for Ryuichi Sakamoto videos?

Karl Kliem: The music of Alva Noto + Ryuichi Sakamoto consists of two contrasting parts: piano vs. electronic. with the trioon video the first idea was to visualize an abstract keyboard but without a predictable behaviour.

The Berlin video is based on the visuals I did for the insen tour, but developed further. On the tour we had LED screens with a size of 11m x 1m, so the balls were moving on a broader horizon.

How were they created?

With trioon for example I made in an iIlustrator file to judge the layout and size of the two keyboard octaves. Then I rebuilt the layout in max/msp/jitter. I made a midi transcription of the piano. The eight octaves are mapped to only two octaves which are arranged on top of each other. Then I rendered the keyboard in realtime while sending the midi notes to jitter. I rendered a modified spectroscope analysis (part of the jitter examples) of the complete soundfile in realtime and composed both in Final Cut Pro.

What do you think about the intersection between VJ and music video forms?

It probably depends an the concrete piece and situation. Each genre has it’s history and raison d’être. VJs, in my opinion, often misunderstand what their job is: at least in a club context I don’t want my attention to be craved by real video footage. I want bright and dark contrasts that support me getting lost in the music. Like fog and stroboscopes did ten years ago and what hopefully LED walls can do in a sophisticated way in the near future.