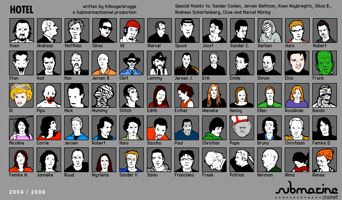 I’ve just recently completed an essay to be included in the upcoming monograph Modern Living: The Graphic Universe of Han Hoogerbrugge, a book on this pioneering flash animator’s work. The book will be published later this year through BIS Publishers in cooperation with SubmarineChannel.

It’s given me a chance to reengage and fully explore Hoogerbrugge’s work again, as I haven’t been in contact with him since writing my contributions for the On Air: MTV book. I suggest you indulge in the interactive narratives of Hotel and other pieces on his website when you’ve got a few spare cycles. Hans is definitely seeding his own fertile territory in moving image, and lives up to the billing of being an ‘Actionscript Auteur’ as I call him in my provisionally titled piece, Flipping out and Floating Away.