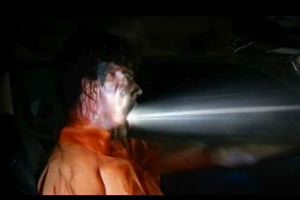 Just been made aware of Plaster Casts of Everything by Liars, and directed by Patrick Daughters, through Stashmedia Feed. Like an amphetamine-fuelled Karma Police, down a Lost Highway, the promo rejects heavy VFX for horrific Gondry-esque projections onto driver, passenger, and naked roadrunner. Part of The Directors Bureau stable, Daughters is currently working on debut feature project.

Particularly like this music video as there’s so many visual signifiers to an interesting backstory. It is not all flash. There’s a concentrated narrative, just waiting to spill out.
[via Stashmedia]