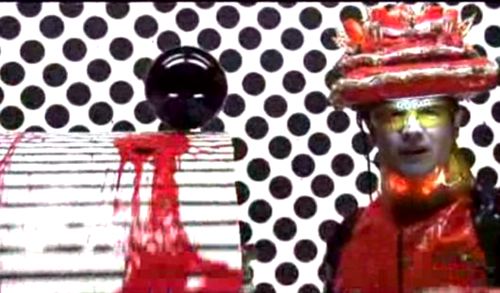 We’re still going through a transitional phase to a full connection with online video’s possibilities. Music video is having a muted moment. There are no great dominating presences, no great white hopes. The visual blockbusters are few and far between. Motion graphics are not hot. Stop motion feels so last year [1]. CG is out, and slo-mo is in [2]. So does this mean things have finally frayed at the seams? Not at all. Is there anything to get animated about? Of course. A brief flash of neon, and a splash of CMYK may be all we get at the moment in terms of visual trends, but the creative threads directors in the field are currently exploring are still an enticing proposition.

The next wave is rolling in, and it is not a stylistic one but conceptual. There is a significant swell in emerging directors creating interesting work. They are tinkering and developing ideas free from being pulled along by any dominating currents. While there’s still room for quirky photorealistic rapping fish (Dom & Nic’s Salmon Dance for The Chemical Brothers), and rutting rabbits wrangled into 3D by Pleix (Groove Armada’s Get Down), animation is more chaotic [3] and aggressive [4] when it is actually seen in the wild compared to the polish and clean vector lines of the near past.

This is, as ever, a reaction to the dominant trend in the last few years of graphic effects saturation. For current directors the tide has definitely shifted: music video’s leading edge has changed from high end animation to lo-fi, rough and ready video creation. Live and spontaneous is the order of the day, which we see in clips for Deerhof’s The Perfect Me and RJD2’s Work It Out. These clips use natural environment to the fullest, and camera composition is defiantly freeform. This change is made explicit in the visual legerdemain of My Robot Friend’s Robot High School video. Director Roel Wouters focusses in on a glossy black ball rolling over a monochrome, geometric landscape evoking early computer animation experiments, only to pull away to reveal a simple handcranked cylinder which is being used to perpetrate the illusion.

The move to everything working ‘in camera’ can undoubtedly be tracked back to the ever-dominant presence of Michel Gondry. His latest Bjork collaboration, Declare Independence, taps into the other clear emerging element. It is what Bjork’s partner, art world luminary Matthew Barney, is absolutely familiar with: moving image as sculptural form. The video performance as performance art–as video art–has never been nearer. This intermingling and borrowing has never been clearer. Mike Mills himself even uses acclaimed performance artist Miranda July as the sole focus for Blonde Redhead’s Top Ranking video.

Music video has gone back to basics. The trawling of high concepts through the video art masters has been catalysed, paradoxically, by the immediacy of YouTube’s webcam hits, and off-the-cuff recordings. Who’d have thought the rise and influence of user-generated content would lead to anything so highbrow?

Matt Hanson is the author of Reinventing Music Video. His moving image blog is at http://eternalgaze.net

[1] A sublime exception to the rule: Koichiro Tsujikawa’s video for Like A Rolling Stone, by Cornelius
[2] See Kanye West’s Flashing Lights clip, directed by Spike Jonze.
[3] Corin Hardy directed She’s The New Thing by The Horrors.
[4] $$ Troopers for Huoratron, directed by Las Palmas is a prime example.